Employers and a lack of policy are to blame for the shortage of male teachers in early childhood education, says a leading ECE expert. Dr Sarah Farquhar, the national coordinator of ChildForum, has spent many years researching the role of men in ECE. She says there are plenty of men wanting to work in early childhood education, but the main barrier for them is to get a position in a centre.

It’s been seven years working at Kids’ Domain Early Learning Centre in Auckland, New Zealand. I have spent three years to qualify in New Zealand as an early childhood educator.

I’m originally from Japan. I have been living in Auckland for 10 years. I like the relaxed life style in New Zealand. And I like working with infants and toddlers here too.

Although it is not common to be an early childhood teacher in Japan, it’s an even more unusual job for a male. I have parents who have a traditional way of thinking. It means that all children follow their foot steps. In my case, my dad was a carpenter. I was supposed to be a carpenter like him. However many people in Japan started changing traditional way of thinking in general. Younger generation has more freedom of choice.

Meet the Men in Charge in Queenstown 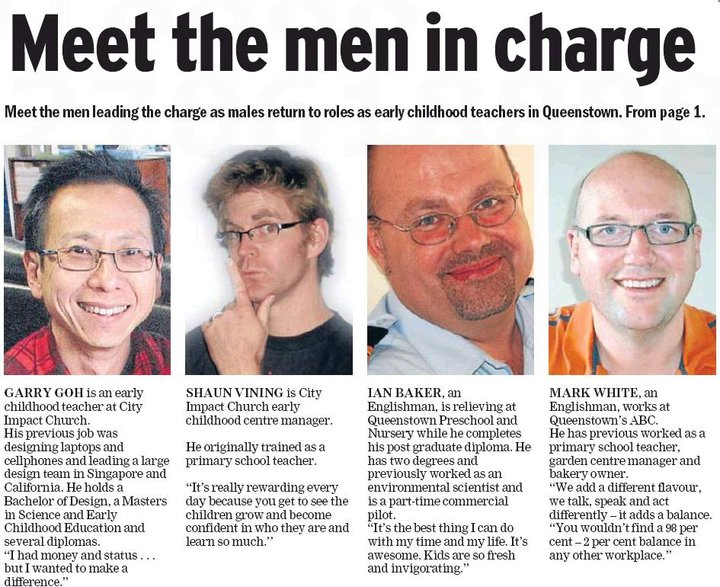 Read more: Meet the Men in Charge in Queenstown

Men make up just 1.6 percent of New Zealand’s early childhood workforce, one of the worst male participation rates in the western world – but the South Island’s largest kindergarten provider is taking a strong stance in addressing this statistic, and enriching the early childhood education environment with a greater gender balance.

EC-MENz regional chapters and associated contacts can be found here.

If your region is not represented and you would like to become a co-ordinator for the chapter please contact us.

There are no events as of date.